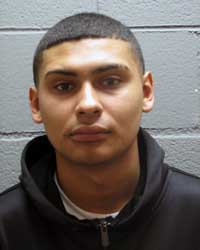 Cook County Sheriff Thomas J. Dart announced today that two men have been charged in a home invasion where two people were shot – one of whom was an offender.

At approximately 9:25 a.m. on Wednesday, Sheriff’s Police received a report of a home invasion in the 4800 block of South Lockwood in unincorporated Stickney.

During their investigation Sheriff’s Police detectives learned that two masked gunmen, later identified as 19-year-old Carlos Tapia and 18-year-old Alberto Manzo, forcibly entered the residence with the intent to take money and drugs. While inside the home, Tapia pointed an assault style weapon at the 20-year-old victim. The victim, who was also armed, shot Tapia multiple times. Tapia also shot the victim.

The victim was taken to an area hospital for treatment. The victim’s 17-year-old brother jumped out a window to flee from the gunmen. He was not seriously injured.

Tapia, of Stickney, and Manzo, of Chicago, fled. Manzo dropped off the injured Tapia at an area hospital, where he was in critical condition, according to the investigation.

Tapia and Manzo were both charged with home invasion. Manzo was denied bond today during his court appearance at the Bridgeview Courthouse. Tapia who remains hospitalized is also being held without bond.