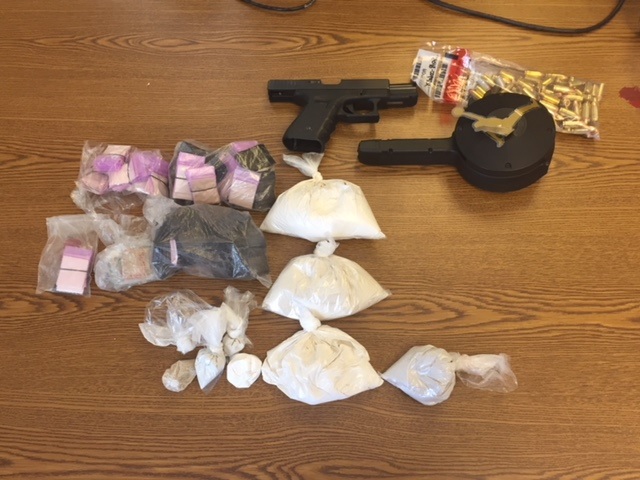 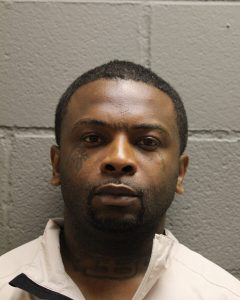 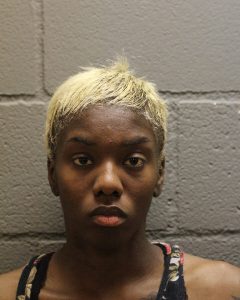 Two people have been charged with multiple felonies after a loaded firearm and suspected heroin were found while Cook County Sheriff’s deputies were enforcing a court-ordered eviction, Sheriff Thomas J. Dart announced today.

At approximately 11:30 a.m. on July 2, Sheriff’s deputies arrived to an apartment in the 5300 block of West Madison in Chicago to enforce a court-ordered eviction. The named defendant in the eviction, Shevitta Thomas, answered the door and deputies entered the residence. Upon entry, an unknown man ran into a bedroom and locked the door. Deputies forced the door open and saw the man reaching into a tote. Deputies ordered the man to stop and remove his hands. He did not comply and continued to reach into the tote. A Taser was used after he refused to comply with the deputies’ orders.

Inside the tote deputies found a loaded 9 mm Glock with a connected wheel drum that had 39 live rounds and suspected heroin.

Several bottles containing various types of pills as well as drug paraphernalia were also found in plain view inside the apartment.

The man was identified as 29-year-old Jerel Moore, who is currently on parole after serving a six-year sentence for robbery. He was taken to an area hospital for treatment and later released. A deputy was also treated and released for injuries sustained while apprehending Moore.

Thomas, 30, was charged with possession of more than 900 grams of heroin, possession of any substance with the intent to manufacture a controlled substance, obstructing an officer and possession of drug paraphernalia. 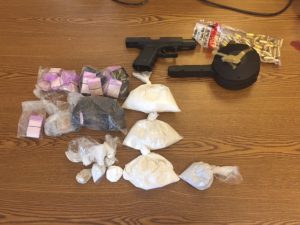