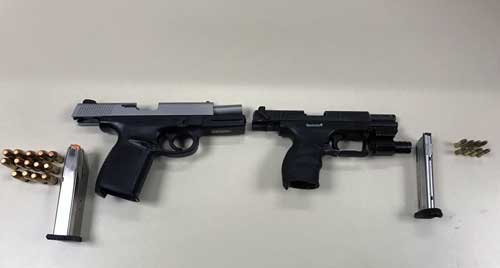 Cook County Sheriff’s Police recovered firearms with loaded magazines – one of which had been reported stolen –and arrested two people during a traffic stop in Ford Heights, Sheriff Thomas J. Dart announced today.

At approximately 3:25 p.m. on Jan. 21, a Sheriff’s Police patrol officer stopped a red, 2002 Mitsubishi Galant in the 1500 block of E. Congress Lane in Ford Heights because the vehicle’s registered owner had an active warrant. The officer smelled marijuana and alcohol as he approached the vehicle. 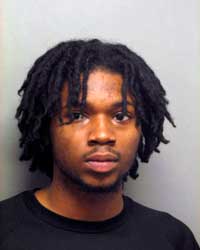 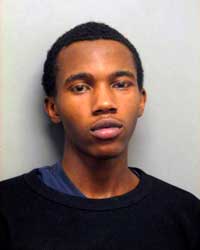 The driver of the vehicle – 20-year-old Karlos Rucker of South Holland – had an active warrant for failure to appear on a resisting/obstructing a peace officer case.

One of the passengers, identified as 20-year-old Tyrail Simpson of Chicago Heights, attempted to flee on foot from the vehicle, but the officer apprehended him a short distance from the vehicle. While placing him in custody, the officer found two weapons – a .40 caliber Smith and Wesson with a loaded magazine and a loaded, .22 caliber Walther P22 with a laser sight attached and a loaded magazine. A check of the weapons found that the Walther P22 had been reported stolen from West Virginia.

A half empty bottle of vodka was recovered from the vehicle.

Simpson was charged with aggravated unlawful use of a weapon, and Rucker was arrested on the warrant. Both appeared on Jan. 22 at the George N. Leighton Criminal Court Building where Simpson’s bond was set at $20,000 and Rucker’s was set at $3,000.