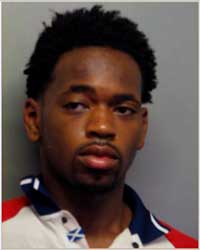 A man aiming a handgun laser sight at people on the roadway has been charged with aggravated assault, Sheriff Thomas J. Dart announced today.

Derrick Harrington, 21, of Chicago was driving early Monday, Sept. 5 when he allegedly pointed a gun at a driver and her passenger, according to the victims.

At approximately 1 a.m., while conducting a safety check at 7100 S. Indiana in Chicago, Sheriff’s Police were informed of the incident by one of the victims, who added that the suspect was in the vehicle behind them.

Sheriff’s Police learned that the handgun was under the driver’s seat in Harrington’s car, and later recovered a loaded .40 caliber Glock with an activated laser sight.

Despite the suspect refusing orders to show his hands and exit the vehicle, officers were able to extract and handcuff Harrington without incident.

The defendant, who possessed a valid Firearm Owner Identification and Concealed Carry License, was charged with two felony counts of aggravated assault with a handgun laser and his permits are being processed for revocation.