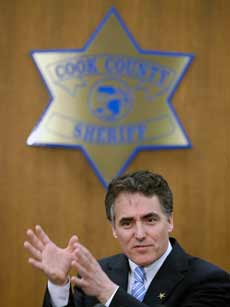 As Cook County Sheriff, Tom Dart has brought an aggressive, yet innovative approach to law enforcement. A former prosecutor and state legislator, Sheriff Dart has long fought to protect the most vulnerable members of our society.

As a prosecutor, he helped initiate a massive public corruption investigation in the poverty-stricken village of Ford Heights, which led to the indictments of multiple police officers.

Since becoming Sheriff in 2006, he has introduced sweeping changes at the Cook County Jail, the nation’s largest single site jail, aggressively re-structured the Sheriff’s Police force, and improved operations of the Court Services Department.

At the Cook County Department of Corrections, the Sheriff oversees a population of over 12,000 that includes inmates both housed on-site and ordered to alternative programs such as electronic monitoring. From addressing concerns surrounding general overcrowding and a growing mental health population to developing environmentally sustainable initiatives for inmates, Sheriff Dart has been hailed for his progressive reforms to improve and maintain the safety and security of all those housed and employed at the Cook County Jail. There are approximately 2,500-3,000 people with diagnosed mental illness housed in the jail on any given day, making it the largest mental health facility in the country. Sheriff Dart firmly believes that a service provider is a far more productive setting than a jail for those with mental illness. In 2013, he launched the Office of Mental Health Policy & Advocacy, which operates a 24-hour Care Line for mentally ill ex-inmates and families of current mentally ill inmates, while screening all pre-bond detainees for mental illness. Sheriff Dart has received many awards from national and local mental health advocacy organizations for his push to end what has become a de facto criminalization of mental illness.

Under Sheriff Dart’s direction, the Cook County Sheriff’s Office began the expansion of its jail garden, the harvest of honey from on-site bee hives, the construction of a chicken coop, and the growth of an urban aquaponics system. These projects offer inmates the opportunity to gain valuable and marketable skills that can be utilized upon release, with the produce bringing in revenue and turning a profit for county taxpayers. Under Sheriff Dart’s direction, Cook County Sheriff’s Police assign specialized gang units to curb suburban gang activity through their focus on aggressive regional tactical work, supporting smaller suburban police departments unable to handle the crime rates on their own. He has also prioritized gang intelligence procedures from within Cook County Jail, which serves to prevent further gang conflict and bring justice to victims of gang violence.

In recent years, Sheriff Dart has increasingly focused his attention on the plight of Cook County’s most impoverished suburbs. As suburban police departments increasingly cut budget and staff despite upticks in crime and narcotics activity in their communities, the Sheriff has invested resources to pick up the slack and ensure all Cook County citizens receive a proper level of police protection. In 2008, when the Village of Ford Heights Police Department walked off the job, he directed Sheriff’s Police to enter the town and take over law enforcement operations. The Cook County Sheriff’s Police Department remains the police force in Ford Heights to this day. He also brought Sheriff’s Police into the Village of Robbins for 24/7 patrols following his uncovering of Robbins’ decades-long backlog of untested rape kits and revelations of insufficient training for many of Robbins’ police officers.

He reformed the way Sheriff’s Police handle prostitution arrests– steering prostitutes toward rehabilitative services through the Sheriff’s Women’s Justice Program rather than jail. Sheriff Dart also launched a national campaign to target the “johns” who solicit sex and highlight their roles as catalysts for the sex trade. Since its first operation in 2011, the “National Day of Johns Arrests” has grown to include 51 law enforcement nationwide partners who have combined for 1,832 johns arrests. The Child Exploitation Unit, also founded under Dart, actively pursues child pornography and human trafficking cases; such work provided the foundation for his federal lawsuit against the website Craigslist, which ultimately led to the removal of the Adult Services section previously listed on their website. Sheriff Dart has since turned his attention to Backpage.com, now the most prominent conduit for online sex ads, shining a light on the company’s facilitation of the sex trade while pushing for policy and legal strategies to protect the website’s victims.

Sheriff Dart also overhauled the county’s approach to foreclosure evictions – ensuring that evictees receive proper notice before being put out on the street and offering on-site social services geared towards families with school-age children, the elderly, and individuals suffering from mental illness. Sheriff Dart gained national prominence in 2009 for placing a moratorium on evictions after banks admitted to robo-signing foreclosure documents.

In 2009, Time magazine named Sheriff Dart one of the 100 Most Influential People in the World, thanks to his groundbreaking efforts.

He and his wife Patricia live on Chicago’s South Side and are the proud parents of five young children.