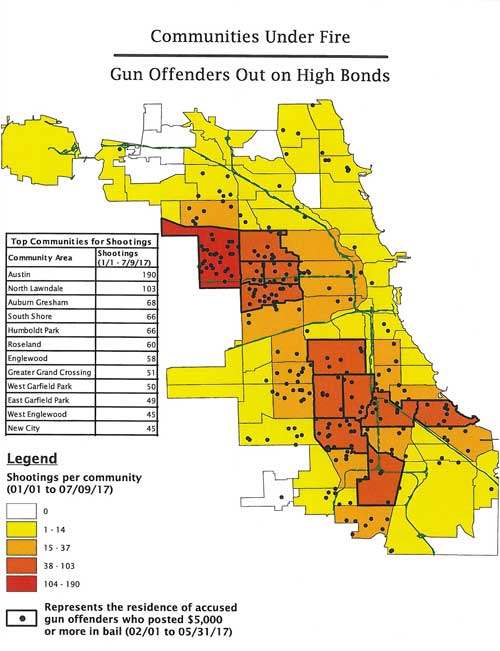 In an effort to stem the continuing violence on Chicago’s streets, Cook County Sheriff Thomas J. Dart announced Thursday that his office will notify local police when accused gun offenders post high bonds to return to communities besieged by shootings.

Dart is also asking the Cook County State’s Attorney to take actions to determine the source of money being used to bail out accused gun offenders.

The actions follow a study by his office documenting that gun offenders – often alleged gang members – have access to significant amounts of cash to gain freedom even when judges set high bonds.

“Gang members arrested on gun crimes can quickly come up with thousands of dollars—often tens of thousands of dollars in cash—to get out of jail and return to communities they continue to terrorize,” Dart said. “We should be using the laws on the books to find out where they are getting that kind of money. This shows how our broken cash bail system permits violent offenders to return to the streets within hours while many of those who are poor are stuck behind bars on non-violent crimes.”

Sheriff Dart’s actions are in response to the shootings and homicides on Chicago’s streets and target clear and troubling holes in the criminal justice system.

Sheriff Dart has previously called for the abolition of the cash bail system because it keeps poor individuals locked behind bars regardless of their threat to public safety, while allowing violent criminals to go free if they have cash. He has advocated for a system that weighs the risk to public safety to determine who stays in jail pending trial or goes free.

Earlier this year, Sheriff Dart introduced SB1980 in the General Assembly to make it easier for judges to deny bond to certain gun offenders deemed a risk to public safety. The state Senate approved the measure without opposition, but the state House has so far failed to act.

On Thursday, Sheriff Dart released results of the office’s ongoing research on the issue. This analysis looked at accused gun offenders who posted $5,000 or more to be released from custody between Feb. 1 and May 31 of this year. Among the findings:

Approximately 70% of the 351 accused gun offenders reside in Chicago and many returned to communities plagued by violence.