To ensure the public is better protected from those who lose their right to carry deadly weapons, Cook County Sheriff Thomas J. Dart proposed legislation Thursday to create countywide police units to recover those weapons and to improve information sharing about those firearms.

The move would close loopholes in state law and processes that Sheriff Dart and anti-violence advocates have long pointed out. Currently, Illinois law relies on an “honor system” when an individual’s firearm license (FOID) is revoked, which often happens because of an arrest, an order of protection or a court’s determination that the person is a danger to themselves or others.

Under the law, such an individual is sent a letter by state police directing them to turn their weapons over to police or another person lawfully able to carry weapons. Additionally, critical information about whether the person attempted to purchase weapons – before or after the revocation – is not shared with local law enforcement.

Sheriff Dart’s proposal requires such information to be shared with local police within 24 hours of a revocation or attempted purchase.

The legislation also mandates the creation of countywide units to recover weapons from those who have their FOID cards revoked. The units will be led by the county sheriff and include members of the county state’s attorney office and local law enforcement. The legislation directs a portion of existing state FOID fees to the effort. Plus, the proposal increases the penalty from a misdemeanor to a Class 4 felony for those who fail to relinquish their weapons when their FOID is revoked.

n 2013, Sheriff Dart created a specialized unit to recover weapons and revoked FOID cards in Cook County. So far, the unit has recovered more than 1,000 firearms. Additionally, the Sheriff is proposing an increase in the FOID card application fee from $10 to $15, the additional money would be deposited into a fun dedicated to revocation enforcement.

Last week’s tragedy at the Henry Pratt Company serves as a stark reminder of these dangerous loopholes in our current laws,” Sheriff Dart said. “Too many times there are clear warning signs about deadly violence. We must do more as a state to ensure law enforcement is reacting to those signs and has the information and tools necessary to do so. As we are constantly and tragically reminded, lives are at stake.” 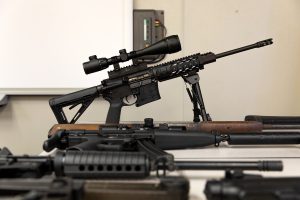