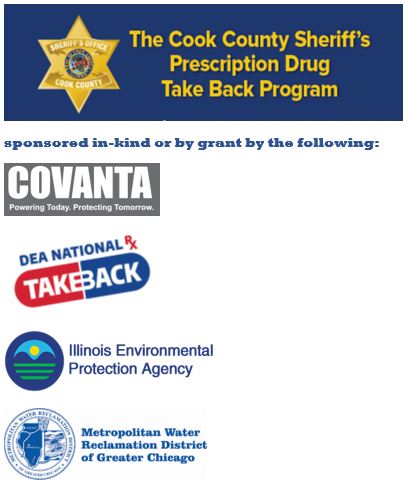 FOR PHARMACEUTICAL MANUFACTURERS
OR RE-PACKAGERS AND RETAILERS

Producers1 or Re-packagers2 and Retailers subject to Sec. 46-102 must complete the Producer Registry Form or Re-packager and Retailer Notification Form available on this webpage and submit the completed Form as described under Sec. 46-104(b), via Internet or email to the Director of Sheriff’s Prescription Drug Take Back Program at sheriff.recycling@cookcountyil.gov.  The Director may, on a case-by-case basis, approve in writing requests for extensions of time for the submission dates and deadlines in this Sec. 46-104.  Each Producer3 must participate in the Collection Plan and pay a Registration Fee as well as meet with the Producer.

1Producer means a Manufacturer engaged in the manufacture of a Covered Drug sold in Cook County, including a brand-name or Generic Drug on the date of enactment of the ordinance, October 23, 2016. Producers were required to register with the Director of the Sheriff’s Prescription Drug Take Back Program commencing January 23, 2017.

4Under the ordinance, a Covered Drug means a Drug sold, offered for sale or dispensed in Cook County in any form, including prescription, nonprescription, brand name and generic drugs. Covered Drug does not include (1) vitamins or supplements, (2) herbal-based remedies and homeopathic drugs, products or remedies; (3) cosmetics, shampoos, sunscreens, toothpaste, lip balm, antiperspirants, or other personal care products that are regulated as both cosmetics and nonprescription drugs under the federal Food, Drug and Cosmetic Act (Title 21 U.S.C. Chapter 9); 4) Drugs for which Producers provide a pharmaceutical stewardship or take-back program as part of a federal Food and Drug Administration-managed risk evaluation and mitigation strategy (21 U.S.C. Sec. 355-1); 5) Drugs that are biological products as defined by 21 C.F.R. Sec. 600.3(h) as its exists on the effective date of this Ordinance if the Producer already provides a pharmaceutical product stewardship or take back program; and 6) medical devices or their components parts or accessories. Sec. 46-102.