Man Wanted for Sex Trafficking of a Minor Arrested 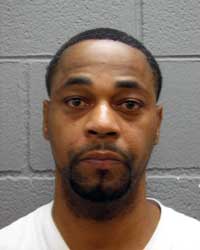 Derrick Hill, 41, was taken into custody on Oct.23 at his home by the Streamwood Police Department on a $1.5 million arrest warrant for involuntary sexual servitude of a minor. The warrant, issued on Oct. 7, stemmed from a Cook County Sheriff’s Police Vice Unit investigation that began in January.

According to the Sheriff’s Police Vice Unit investigation, Hill arranged “dates” on Backpage.com for the juvenile victim where she would perform sex acts for money, and Hill would profit from those “dates.” The investigation found that Hill also rented the hotels rooms where these acts would occur.

Hill also was arrested for an outstanding traffic violation warrant.

Sheriff Dart would like to thank the Streamwood Police Department for their assistance in this case.

Sheriff Dart also reminds the public that the defendant is presumed innocent until proven guilty by the Government in a court of law.