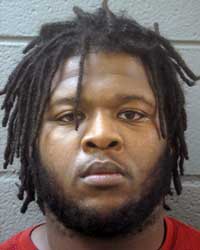 The Central Warrant Unit received information from the Bradley Police Department that the individual, Aaron Harris, was in Chicago. On Oct. 21, Central Warrant Unit member went to the 800 block of North Central Park Avenue, and after being let inside the residence, located Harris, 21. He was arrested without incident on the $75,000 warrant from Kankakee County for aggravated battery to a peace officer and aggravated flee/attempt to elude officer.

The warrant was issued for Harris’ arrest on Oct. 8 for an Oct. 3 incident where Harris allegedly dragged a Bradley police officer with his vehicle while fleeing a traffic stop.
Harris then allegedly left the area, driving at a high rate of speed. The vehicle was located, but it was abandoned.

Harris was also arrested for a 2014 DeKalb County warrant for failure to appear on an aggravated discharge of a firearm case.