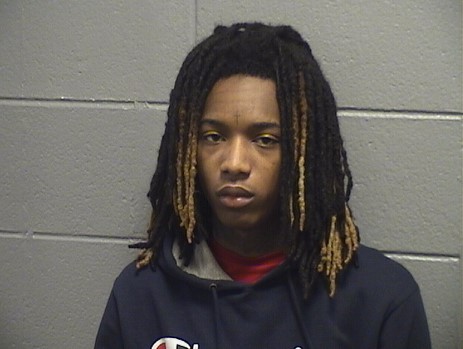 COOK COUNTY, IL – An 18-year-old man has been charged with multiple felonies after he crashed the stolen vehicle he was driving into another car and dropped his gun while fleeing the scene, Cook County Sheriff Thomas J. Dart announced today.

At approximately 6 p.m. on Wednesday, Nov. 2, investigators from the Cook County Sheriff’s Street Crime Suppression Unit observed a vehicle that was reported stolen. The 2013 Hyundai Elantra turned in an alley near the 300 block of North Mayfield Avenue in Chicago’s 15th Police District. Upon exiting the alley, the stolen Hyundai struck another vehicle.

Investigators then observed the Hyundai’s driver, later identified as Jaylen Smith of the 1000 block of North Monitor Avenue in Chicago, exit the vehicle with a gun in his hand. He cut through a backyard in the 300 block of North Mayfield Avenue with investigators pursuing on foot. An additional investigator rendered aid to the driver of the vehicle struck by Smith. The driver of the second vehicle was uninjured.

After a short foot pursuit, Smith was taken into custody. He was searched and no gun was found. A Cook County Sheriff’s K9 officer conducted a search of the area and located the firearm in a backyard through which Smith was observed running. The weapon was discovered with 12 live rounds in the inserted magazine and one chambered round.

The vehicle appeared to have the steering wheel column peeled off and was started with a UBS charging cable. Investigators searched the vehicle and recovered a cellphone. The screen saver displayed a photo of Smith holding two guns, including one that appeared to be the firearm recovered from the scene.

A name inquiry of Smith was conducted and returned with no valid driver’s license, FOID card, or concealed carry license. He was charged with Aggravated Unlawful Use of Weapon, Unlawful Possession of a Stolen Vehicle, and Leaving the Scene of an Accident.

Smith appeared for a bond hearing today, Thursday, Nov. 3, at the George N. Leighton Criminal Court Building. He was given a $20,000 D-bond with Electronic Monitoring. He remains in custody.