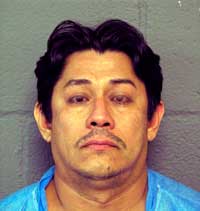 An Arlington Heights man has been charged with first degree murder after a Cook County Sheriff’s Police investigation found that he shot and killed his wife, Sheriff Thomas J. Dart announced today.

At approximately 1:45 p.m. on July 31, Sheriff’s Police responded to report of a shooting at a residence located in the 10 block of 3rd Avenue in unincorporated Arlington Heights. Investigators learned that 38-year-old Divina Salgado was shot by her husband, Jose Arturo Salgado-Roque, as she walked into their home carrying their 1-year-old child. Salgado-Roque was located and taken into custody by Cook County Sheriff’s Police.

The 1-year-old and two other children were placed in the custody of Illinois Department of Children and Family Services.

Salgado-Roque, 42, has been charged with one count of first degree murder. He is scheduled to appear for a bond hearing today at the Rolling Meadows Courthouse.