Man Charged in Sexual Assault of Teen at Forest Preserve 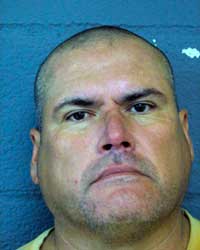 A 46-year-old man has been charged in connection with a reported sexual assault of a 16-year-old boy that occurred at the Cermak Woods Forest Preserve, Cook County Sheriff Thomas J. Dart announced today.

Cook County Forest Preserve Police notified Sheriff’s Police detectives on Sept. 5, after receiving a report of an alleged assault that occurred the night before near the pool at the Cermak Woods, located in the 7600 block of Ogden Avenue in Lyons.

According to the Sheriff’s Police investigation, the victim, a 16-year-old boy, was approached by a man sometime between 9 p.m. and 10:30 p.m. on Sept.4. According to the report, the man told the teen he was armed, forced him to drink alcohol and then sexually assaulted him. The victim did not know the offender.

Robles’ bond was set at $500,000 during a hearing today at the Bridgeview Courthouse.