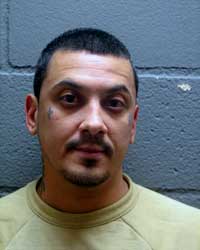 A 36-year-old man has been charged with the murder of a man whose body was found at the Thatcher Woods Forest Preserve, Cook County Sheriff Thomas J. Dart announced today.

Sheriff’s Police Detectives responded on May 30, 2016 to Thatcher Woods for a death investigation. Human remains had been found in a plastic bag. The Cook County Medical Examiner’s Office determined the cause of the man’s death was a gunshot wound.

The victim was identified as Fernando Casas, 19, of Stone Park. Casas had been missing since May 19.

During their investigation, Sheriff’s Police detectives identified the shooter as Carlos Martinez-Rodriguez, who was last seen with the victim.

On Sept. 6 an arrest warrant was issued for Martinez-Rodriguez, who was found to be residing in New York City. On Jan. 5, Martinez-Rodriguez was returned to Cook County. He has been charged with first degree murder.

← Man Charged with Funeral Directing without a License, Forgery Jail Individual in Custody Charged with Aggravated Battery to Staff →