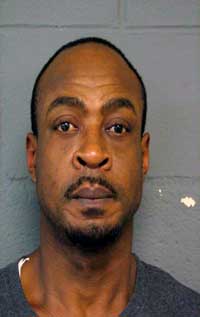 At approximately 4:50 a.m. on July 14, Cook County Sheriff’s Police received a report of a home invasion at the Sterling Estates mobile home park. When Sheriff’s Police arrived they located the 74- year-old victim inside the residence with a sock tied around her mouth, which the responding officers untied. The woman did not appear to have physical injuries. She declined medical assistance.

Officers learned that a masked man entered the victim’s residence, threatened her with a knife, tied her up and took her debit card and her car keys. He then fled in the victim’s vehicle. The victim was able to free herself and call 9-1-1.

Officers located the victim’s vehicle a short distance away.

During their investigation, Sheriff’s Police identified the offender as Dandre Mabone. On July 15, Sheriff’s Police took him into custody outside his residence in the 400 block of Sterling East in unincorporated Justice.

Mabone, who has various aliases, has been charged with two counts of armed robbery and one count of home invasion. He is scheduled to appear for a bond hearing today at the George N. Leighton Criminal Court Building.