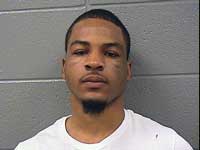 Four felony charges have been filed against a 21-year-old man who fought with Cook County Sheriff’s courtroom deputies trying to take him into custody, Sheriff Thomas J. Dart announced today.

Cook County Associate Judge Michael Kane had ordered DUI defendant Artavius Sims held without bond and taken into custody at the Bridgeview courthouse Monday morning for failing to meet the conditions of his probation on the drunk-driving charge.

As courtroom deputies took Sims into custody, Sims pulled away from one courtroom deputy, causing her to fall and sustain serious injuries, according to the investigation. Then Sims punched another deputy in the face. A third deputy was struck by a podium as Sims tried to flee. Sims ran into his own public defender, knocking him to the ground. Two deputies handcuffed Sims and returned him to the lock-up.

Sims, who originally faced a DUI charge, now faces two charges of aggravated battery and two charges of resisting an officer. He appeared today at the George N. Leighton Criminal Court Building where his bond was set at $90,000 for the new charges.