Man Brought Back to Cook County to Face Charges in Incident Where Victim Was Battered, Put in Cage

A 28-year-old man who was wanted in connection with a 2014 aggravated domestic battery incident where another man was put in a dog cage and had hot wax thrown on him, has returned to Cook County to face charges, Cook County Sheriff Thomas J. Dart said today. 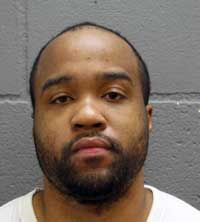 William Bailey, of Grand Rapids, Mich., appeared today at the Skokie Courthouse, where his total bond was set at $1 million. Bailey has been charged with aggravated battery, unlawful restraint and robbery.

Bailey previously had been held in Michigan. Members of the Cook County Sheriff’s Central Warrant Unit returned Bailey to Cook County on Sept.24, after his Michigan cases were resolved.

According to the Sheriff’s Police investigation, detectives responded to an area hospital on Sept. 30, 2014 on a report of a battery. They learned that the 47-year-old victim had been battered by Bailey, his cousin, who had been staying at the victim’s unincorporated Des Plaines apartment.

Bailey punched the victim and confined him to a dog cage, according to the investigation. He threw hot wax on the victim, and the victim was burned with cigarette lighter.