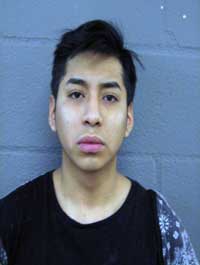 An 18-year-old man who was taken into custody for one burglary was also charged in connection with another burglary after Sheriff’s Police officers found items stolen from a second location, Cook County Sheriff Thomas J. Dart announced today.

Humberto Moran, of unincorporated Des Plaines, is scheduled to appear today for a bond hearing at the George N. Leighton Criminal Court Building. He has been charged with two counts of residential burglary.

At approximately 3:30 a.m. on Saturday, Sheriff’s Police received a report of a burglary in progress occurring in the 9600 block of N. Greenwood in unincorporated Des Plaines. They also received a description of the offender who was fleeing the scene at the time of the report.

Sheriff’s Police officers responded and searched the area for the offender. During their search, officers received a report of a suspicious person in an apartment complex in the 8600 block of Golf Road. Officers located a man at that location who matched the description of the offender in the burglary. They also observed a wallet and other items near the man, who as identified as Moran. The wallet contained items that belonged to someone other than Moran or the victim.

Officers learned those items belonged to a second burglary victim, who lived in the apartment complex where officers located Moran.

Further investigation by Sheriff’s Police identified Moran as the offender in both burglaries.