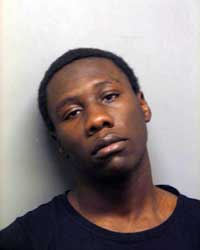 A 19-year-old man has been charged in connection with a shooting that injured another man at Ford Heights’ store, Cook County Sheriff Thomas J. Dart announced today.

According to the Sheriff’s Police investigation, the 32-year-old victim was shot on Nov. 8 by a man who attempted to rob him at the New Way Foods in the 1300 block of E. Lincoln Highway. The victim was taken to an area hospital for treatment of injuries that did not appear to be life threatening.

The Sheriff’s Police investigation identified the shooter as Robert Newcomb of Ford Heights. Newcomb was taken into custody on Nov. 8. On Nov. 10, he was charged with aggravated battery with a firearm and attempted armed robbery. Newcomb’s bond was set at $750,000 during a hearing at the Markham Courthouse on Nov. 10.

Newcomb’s next scheduled court date is Nov. 30 at the Markham Courthouse.