According to the Sheriff’s Police investigation on Dec. 5, a man approached the 22-year-old victim as he exited his vehicle in the 1500 block of Embassy Lane. The offender displayed a handgun and demanded the victim’s wallet and money. The offender, who knew his victim, struck the victim in the head with the gun, according to the report. A struggle for the weapon ensued and during that struggle the gun discharged, and the bullet struck an unoccupied vehicle. No one was injured from the gunfire. The offender fled the area on foot.

The victim was taken to an area hospital where he was treated for his injuries and released. 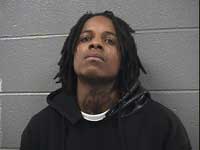 Michael Johnson, of Ford Heights, was taken into custody on Dec. 8 after the investigation identified him as the offender. Johnson was charged with one count of armed robbery on Dec. 9. His bond was set at $350,000 during a Dec. 10 hearing at the Markham Courthouse.