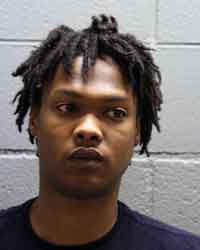 A 23-year-old man has been charged with a felony after Cook County Sheriff’s Police officers found him with a stolen pistol in unincorporated Melrose Park, Sheriff Thomas J. Dart announced today.

At approximately 2:45 p.m. on Nov. 3, Sheriff’s officers responding to another complaint in the 2300 block of North Mannheim Road, learned that Jovantae Withers was in the area and carrying a gun. Withers was subsequently located nearby and found with a loaded 9mm pistol in his waistband. The gun had a full 14-round clip.

Further investigation found that Withers, a Hillside resident, has a previous felony conviction and does not have a Firearm Owner’s Identification (FOID) card or Concealed Carry permit.

Withers was taken into custody and charged with aggravated unlawful use of a weapon, a class 2 felony.

During a bond court appearance on Saturday, Withers received an I-bond and was released on his own recognizance.