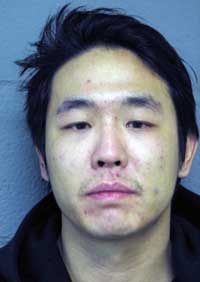 An investigation by the Cook County Sheriff’s Central Warrant Unit, the Wheeling Police Department and the FBI led to apprehension of a man in Mexico who is wanted in a Wheeling home invasion case, Sheriff Thomas J. Dart announced today.

Steve Chung, 28, was one of two people charged in a 2014 home invasion that occurred in Wheeling. The victim was held at gunpoint and beaten. An arrest warrant was issued in June 2015 for Chung, whose last known address was in Des Plaines, after he stopped coming to court.

Working with Wheeling Police, the Sheriff’s Central Warrant Unit learned last month that Chung was in Guadalajara, Mexico. He had been living in Mexico since June 2015, teaching English online. The Central Warrant Unit contacted the Federal Bureau of Investigation Violent Crime Task Force for assistance in locating him.

On Wednesday, Mexican Immigration officials and the FBI located Chung in Guadalajara and arrested him. Mexican immigration officials escorted Chung on his flight this morning to Chicago. Central Warrant Unit officers and FBI agents took Chung into custody after he landed at Midway Airport.

Chung is scheduled to appear for hearing on Friday at the George N. Leighton Criminal Court Building.