COOK COUNTY – A Des Plaines man has been charged with possession of child pornography after investigators found sexually explicit images of children under the age of 13 on his cellphone, Cook County Sheriff Thomas J. Dart announced today.

SVU investigators traced information from a tip received by the National Center for Missing and Exploited Children and linked Cholino Sanchez-Gonzalez, 24, of the 500 block of Kenilworth Court, to downloading and viewing images of child pornography through an app on his mobile phone.

On Tuesday, Sep. 21, SVU investigators conducted a traffic stop where Sanchez-Gonzalez was taken into custody for further investigation.

After being issued his Miranda Rights, Sanchez-Gonzalez admitted to investigators that he used his cellphone to view and download and save images of underage children from a website. He then showed investigators where he saved the images on his cellphone.

A subsequent forensic examination of his phone revealed an additional number of pornographic images of children as young as 8-years-old.

Sanchez-Gonzalez is scheduled to appear in the Cook County Second Municipal District Courthouse in Skokie today for a bond hearing on one count of possession of child pornography, a Class 2 felony. 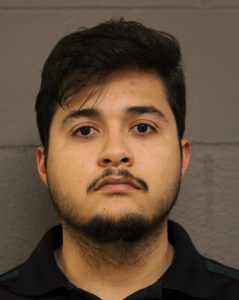 ← Sheriff’s Office Asks Illinois Supreme Court to Require IDOC to Accept Transfer of All Individuals in Cook County Jail Who Should be in State Custody Man Charged with Murder, Attempted Murder, and Aggravated Kidnapping for Ford Heights Slayings →