Tap below for Corrections Menu

Division XI
3015 S. California Blvd. Chicago, IL 60608
Opened in 1995, Division XI is a state of the art 640,000 square foot, medium-security facility. Consisting of central core surrounded by four housing PODS, Division XI can house 1,536 male individuals in custody of all security level classifications. All activity is controlled and monitored by a touch screen security system. Division XI is home to our Recipe for Change culinary program for individuals in custody with an operational training kichen

Division XVI
Opened in 1997, Capacity – 200 Classification – Male/Minimum/Medium/Programming
Division XVI, formally The Vocational Rehabilitation Impact Center (VRIC), formally known as Boot Camp, opened in 1997 and was renamed in July 2012. It was designed for court-ordered non-violent offenders and was located on a 10.2-acre complex with a total of ten buildings on the grounds. It included two educational buildings, four dormitories, a mess hall, an intake dormitory containing medical and counseling offices, a gatehouse, gymnasium, and administration building. The VRIC program was moved to another area of the facility in October 2017. The space was then used for daytime programming individuals detained who participated in the Sheriff’s Mental Health Transition Center. Division XVI was re-opened in March 2020 due to the COVID-19 global pandemic in order to provide a separate isolation facility within the CCDOC. Currently, Division XVI houses individuals in custody who are participants of CCSO programming such as the Mental Health Transition Center.

External Operations
2834 W. 31st Street Chicago, IL 60608
External Operations is responsible for the security of the facility perimeters, as well as the transportation of individuals in custody to and from court appearances, the hospital and Fantus Clinic.

Division I
2700 S. California Ave.  Chicago, IL  60608
Division I, the oldest building in the complex, was opened in 1929. The Division now has a capacity to house 1,250 maximum security male individuals in custody including the compounds largest PACE Institute program. The four-story building is divided into eight blocks. 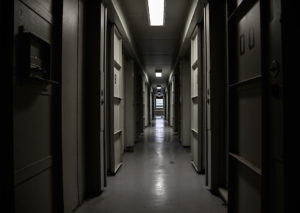 Division III
2700 S. California Ave. Chicago, IL 60608
Division III was an overflow building set up to house minimum and medium male individuals in custody during population spikes at the jail that required the use of additional jail tiers.