Tap below for Corrections Menu

Cook County was established by the Illinois State Legislature in 1831. Chicago, an unincorporated settlement with fewer than 60 residents, held the county seat. The first county jail and courthouse was a small wooden stockade built in 1835, outgrown 15 years later.

The county built a larger court and jail on Hubbard Street for offenders awaiting trial for serious crimes; once sentenced, convicts were transported to the state prison.

Offenders arrested in Chicago for less serious crimes were detained for days or a couple weeks at the city “Bridewell,” at Polk and Wells.

The city’s population rises, and so does crime

In 1871, the “Bridewell” was moved to 26th and California and named the Chicago House of Corrections, housing an average of 419 individuals in custody daily. Until the early 20th Century, individuals in custody as young as 7 years old were held with the general population; only female offenders were housed in isolation. 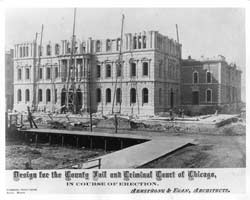 Overwhelmed with a continually overcrowding population, the Hubbard Street court and jail was renovated and expanded on a small scale. In the roaring ‘20s, the jail was housing almost twice its capacity at 1200 individuals in custody, and a courtroom shortage caused a back-log in cases. 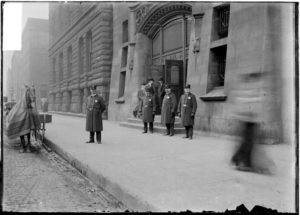 The responsibility of housing death row convicts sentenced was shifted from the state to the county, which only added responsibilities and complications to jail management. The demographics further exacerbated the issue, going from 7% county sentenced individuals in custody in 1929 to 60% county sentenced individuals in custody in 1954, some serving up to 5 year terms.

Deteriorating conditions called for criminal justice reform, and state legislature voted to merge the county and city jails into one correctional authority. After over 40 years of functioning independently, the Department of Corrections combined staff and individuals in custody into one streamlined entity.

Spurred by a series of federal court orders and overcrowding, the CCDOC continued expanding the jail’s housing capacity.

Sheriff Thomas J. Dart sponsored legislation such as the Rocket Docket, advocated for a cashless bond system and promoted electronic monitoring for non-violent offenders. Over the past decade, the total on-site individual in custody population went from near capacity to approximately 7,500 individuals. With less individuals in custody to house, Division 5 is no longer an individual in custody housing unit, Divisions 3 and 17 were demolished, and Division 1, the “Bridewell” previously belonging to Chicago, has been decommissioned.

After more than 40 years of operating under the Department of Justice’s oversight, the Cook County Department of Corrections underwent a systematic overhaul and in 2017 was ruled in compliance with a federal consent decree.