The Special Investigations Division of the Sheriff’s Police is comprised of specialized units that investigate specific types of crimes. Officers in these units often receive additional training relative to their assignments, arming them with tools that enable them to initiate and conduct productive investigations into gang, drug and vice related criminal activities.

The Sheriff’s Police Bomb Squad is the only full-time explosives detection and recovery unit available to suburban and Federal agencies, responding to calls from Cook, DeKalb, Grundy, Kankakee, Lake, McHenry and Will Counties. All members of the Bomb Squad have been deputized by the U.S. Marshals Service, enabling them to cross geographical borders to assist agencies outside their primary jurisdiction when requested.

Members of the Bomb Squad complete eight weeks of intense training at the United States Army’s Hazardous Devices School in Redstone Arsenal in Huntsville, Alabama. Technicians are mandated to re-certify every three years to maintain their credentials.

The Sheriff’s Police Fugitive Warrants Unit is responsible for all criminal warrants lodged in Cook County. This is a daunting task with an average of 40,000 active warrants at any one time.

Fugitive Warrants investigators are specially trained in extradition law and receive specialized training, exceeding Homeland Security standards, to fly while armed in order to perform their duties. Many investigators are members of the U.S. Marshal’s Great Lakes Regional Task Force, and as such have been issued Special Deputy U.S. Marshal credentials, enabling them to cross state lines in pursuit of fugitives.

The Sheriff’s Police Gang Unit consists of six teams, five of which deploy geographically by court district and a sixth that works closely with the Criminal Intelligence Unit at the Cook County Jail. In addition to investigating gang activity throughout Cook County, officers from the unit are also involved with several Federal task forces and participate annually in the U.S. Marshal’s Service’s “Operation Falcon” warrant sweep. 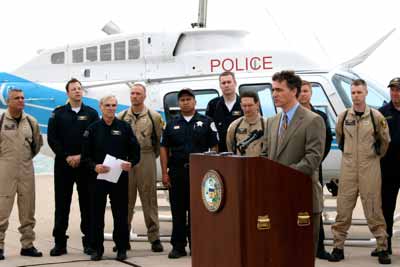 Shared with the Chicago Police Department, the Helicopter Unit consists of two helicopters that will deploy, as requested, all over Cook County. The task force is made up of 11 officers from the Sheriff’s Police and Chicago Police departments, each of whom have specialized training in aerial policing tactics 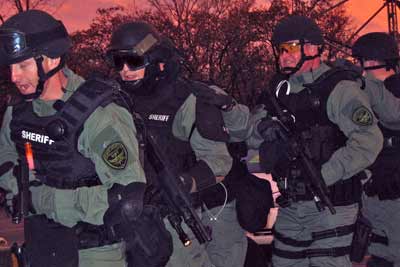 Members of HBT must successfully complete a certified Basic SWAT School before participating in Team activations. In addition to their regular assignments, members of HBT train together one complete week a year and 16 additional hours a month. They also receive approximately 100 hours a year in specialized outside training, in addition to the above. The Sheriff’s Police HBT is compliant with the National Tactical Officers’ Association’s standards.

HBT has participated in various national competitions over the last several years and have received numerous awards from outside agencies including the Illinois Tactical Officers Association and the Illinois Crime Commission. 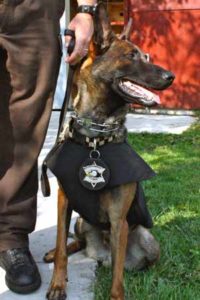 This Unit now consists of 8 officer- Belgian Malinois teams. Since 2004, 200 new police dogs have been trained and 1,250 police dogs have been recertified by the unit’s Master Trainer, who was named 2009 Master Trainer of the Year by the North American Police Work Dog Association. Another officer is a dual handler: in addition to his Belgian Malinois, he also works with the department’s only Bloodhound, Melanie, who in her two years of service has successfully tracked and found five missing individuals.

The K-9 Unit responds to hundreds of requests for assistance each year from the Sheriff’s Police and local, Federal and State agencies. Canine teams are utilized in locating narcotics, finding missing persons, search and rescue missions and locating fugitives.

The Special Investigations Unit has seized more than $8 million worth of counterfeit merchandise.

Since its inception in 1998 the unit has a 100 percent conviction rate on Internet related child exploitation investigations.

Detached Services is comprised of investigators assigned to the Federal Bureau of Investigations, and The Regional Computer Forensic Laboratory (RCFL).