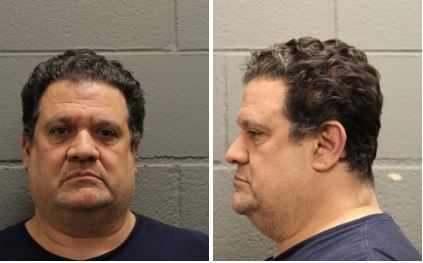 COOK COUNTY, IL – A convicted sex offender has been charged with solicitation, dissemination, and possession of child pornography after investigators found sexually explicit images and videos of children under the age of 13 on his cellphone, Cook County Sheriff Thomas J. Dart announced today.

The Cook County Sheriff’s Police Special Victims Unit received a cyber tip from the National Center for Missing and Exploited Children about images and videos of child pornography found on a social media account linked to Vincent Salvaggio, 55, of the 0-100 block of Walnut Lane in South Barrington.

On Tuesday, May 17, SVU Investigators met with Salvaggio at his residence and advised him of his Miranda Rights. Salvaggio subsequently admitted to sending and receiving sexually explicit images and videos of children as young as infants to and from individuals in the Philippines. He also showed officers where he was storing numerous child pornography images and videos on his cellphone.

Investigators obtained and executed a search warrant on Salvaggio’s cellphone to conduct a forensics examination and determined he shared and stored additional pornographic images and videos of children on multiple social media accounts.

In addition to these charges, Salvaggio was also charged with Class 3 Violation of the Sex Offender Registration Act for failing to disclose all of his social media accounts to the registry. He is currently registered as a sex offender in Illinois for a 2010 conviction in North Carolina for criminal sexual abuse of an underage child.

Salvaggio is scheduled to appear in the Rolling Meadows Courthouse on Friday, May 20, for a bond hearing on the charges.