Broadview Man Arrested for Involuntary Sexual Servitude of a Minor 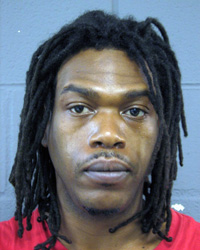 A 26-year-old man has been charged with involuntary sexual servitude of a minor after the Cook County Sheriff’s Vice Unit arrested him during an undercover operation, Sheriff Thomas J. Dart said today.

James R. Taylor, of Broadview, was arrested Jan. 8 in the western suburbs during an undercover operation, during which members of the Vice Unit responded to a “female escort” advertisement found on Backpage.com’s adult section. After connecting with the female over the phone, they arranged a date at a hotel along Roosevelt Rd. Upon entering the room, the female offered sex acts for money, at which point the undercover Vice officer identified himself as a police officer and took her into custody, with the intention of offering her supportive service and ascertaining whether she was willingly performing these sex acts.

As the Vice officers questioned the victim, Taylor began knocking on the door and attempting to enter the room. Sheriff’s officers immediately took him into custody as well. An investigation identified the victim as a 16-year-old who had been reported missing several months earlier. Further investigation revealed that Taylor had been sexually trafficking the victim and keeping the money earned from her prostitution.

The Sheriff’s Office brought the victim into the custody of the Illinois Department of Children & Family Services, where she is currently receiving therapeutic treatment and counseling.

Jackson was charged Saturday with involuntary sexual servitude of a minor, promoting prostitution of a minor, and trafficking for benefits. He is scheduled to appear in bond court today (Sunday) at the George N. Leighton Criminal Courts Building.