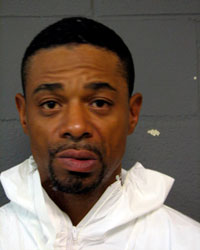 A 44-year-old man has been charged with murder in connection with the death of a woman whose body was found Thursday morning at a golf course in DuPage County, Cook County Sheriff Thomas J. Dart announced today.

At approximately 8 a.m. on Sept. 29, the body of a 37-year-old woman was found at the White Pines Golf Course in unincorporated DuPage County. Further investigation found that the woman – whose name is not being released because her family has not yet been notified – had been killed at the 11500 block of West Grand Avenue in unincorporated Cook County, where she lived with her boyfriend.

During their investigation, Sheriff’s Police detectives learned that at approximately 5 a.m. on Sept. 29, the victim had been in argument with her boyfriend, Johnanthan Condrey, and was fatally stabbed as a result.

Her body was then driven to the golf course and left there.

Condrey was charged with first degree murder on the night of Sept. 30. Another man who had been taken into custody during the investigation was released without charges. Condrey is scheduled to appear today for a bond hearing at the George N. Leighton Criminal Court Building.

Sheriff Dart would like to thank the Chicago Police Department and the DuPage County Sheriff’s Office for their assistance in this investigation.