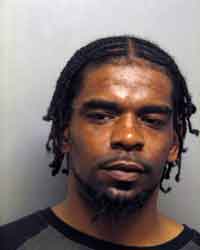 A 36-year-old man has been charged with multiple felonies after an investigation found that he had entered a Ford Heights home in the middle of the night and attacked another man while he slept, Cook County Sheriff Thomas J. Dart announced today.

At approximately 1:25 a.m. on March 9, Cook County Sheriff’s Police were notified of a report of a home invasion that had occurred in the 1400 block of Regent Lane in Ford Heights.

According to the investigation, the victim, a 52-year-old man, was asleep in his bedroom and awoke to another man on top of him, attempting to choke him. The victim is paralyzed on one side of his body. When other family members at the home attempted to intervene, the offender left.

The victim was treated on scene by paramedics.

Sheriff’s Police learned that the suspected offender was attempting to leave the scene. As officers attempted to take that person, identified as Patrick Conway of Ford Heights, into custody, he struck one of the officers in an attempt to flee.

During the Sheriff’s Police investigation, detectives learned that the victim may have been attacked because the victim did not want Conway to live at the residence. The victim had asked Conway to leave the home on multiple occasions.

It was also learned that Conway entered the home through an unlocked window.